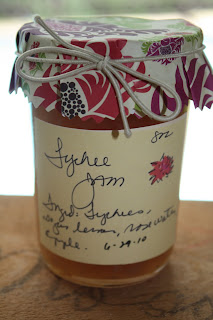 This morning I made Lychee Jam with Rosewater for the first time. The Lychees take some time to peel and pit, but the result is amazing. The Lychees taste like perfume on their own and then when you add that bit of rosewater, it just takes them even higher. I have just ordered more Lychees from the Oriental Farmer’s Market, I can’t wait to try this out with a few different recipes. I will be bringing some to the Rapsodic Bakery in Downtown Orlando and I am sure they will be making some fabulous vegan cupcakes and fillings in the weeks to come.